The classic qualifying competition for UEFA European championship 2020 final tournament will play 55 teams (all UEFA members). Qualification will be held from March to November 2019. There are 10 groups (5 groups by five teams and 5 groups by six teams). Top two teams from each group will qualify for UEFA Euro 2020 final tournament (results in groups will also determine the pot allocation for final tournament draw - more below). All rest teams will still have a chance to secure one of the 4 remaining spots for final tournament - via Nations League play-offs (more informations about play-offs below and on UEFA Nations League 2018/2019 page). Timetable is following:

Seeding of teams into the six drawing pots is based on results of Nations League 2018/2019 group stage (which ran before start of classic qualification - from September to November 2018). For example Pot 1 includes best 10 teams in overall ranking from League A, Pot 2 includes worst 2 teams from League A and best 8 teams from League B and so on. Overall ranking is based on position in group, then earned points, goal difference, scored goal, scored away goals, number of wins, number of away wins, disciplinary points, coefficient. In other words, the group winners are always best-ranked (among teams from same League). Position of these four winners is then based on points, goal difference etc. The group runners-up aree ranked on 5th, 6th, 7th and 8th position. Then follow next postitions and then next Leagues. 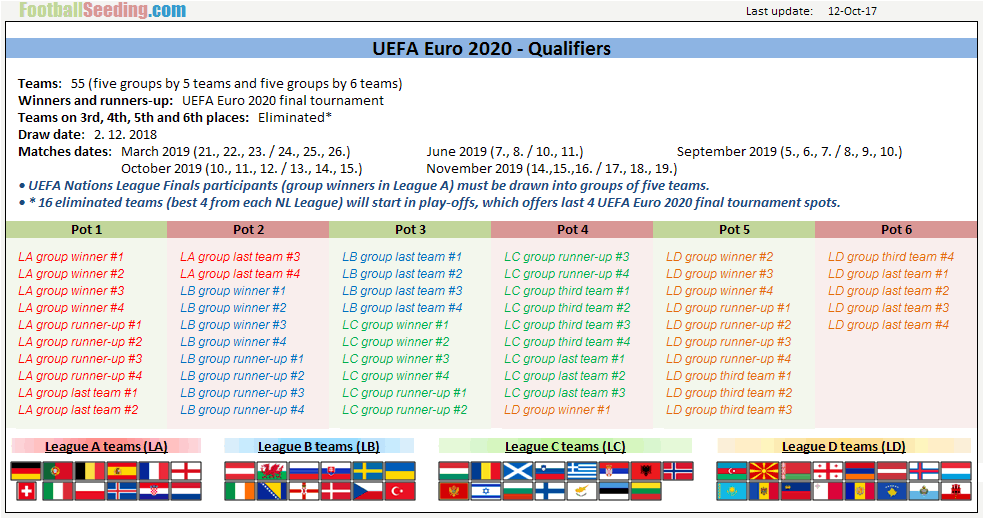 Group winners are marked by •. In case of fail in classic qualifiers, they will start in play-offs. Otherwise next best non-qualified teams in given League (each has different color) will take their place. Nations League Finals participants (Eng, Ned, Por, Sui) must be drawn into groups of five teams. Another restrictions during the draw are:
1) Maximum of 2 host teams will be placed in each group (Aze, Den, Eng, Esp, Ger, Hun, Irl, Ita, Ned, Rou, Rus, Sco).
2) For political reasons, following pairs of teams can't be drawn into same group (Esp+Gib ; Bih+Kos ; Srb+Kos).
3) To reduce matches in winter conditions, a maximum of 2 teams will be placed in each group (Blr, Est, Fin, Fro, Isl, Ltu, Lva, Nor, Rus, Ukr).
4) To reduce travel distances, a maximum of 1 such pair can be drawn into same group: Azerbaijan with (Isl or Por). Iceland with (Arm, Aze, Cyp, Geo or Isr). Kazakhstan with (And, Eng, Esp, Fra, Irl, Isl, Mlt, Nir, Por, Sco or Wal).

Teams which fail in classic qualification may qualify for UEFA Euro 2020 final tournament via Nations League play-offs - each League has guaranteed one spot. The participants will be all group winners (16 teams). Every group winner already qualified for the final tournament via classic qualification will be replaced by best non-qualified team in given League (best runner-up, or second best runner-up and so on).
But what if there will be less than 4 non-qualified teams in given League? There are two possible replacing methods:

When the replacing is at the end and we know all 16 play-offs participants, it's time to make play-offs pairs. In each League - best ranked team will play against 4th best ranked team (and 2nd against 3rd). But what if there are more than 4 play-offs participants from same League? In that case there will be a draw, which decides which teams will 'stay' in this League, and which teams will play the play-offs against teams from higher Leagues. Please note - group winners will never be part of the draw because they can't play against teams from higher league, as already mentioned. 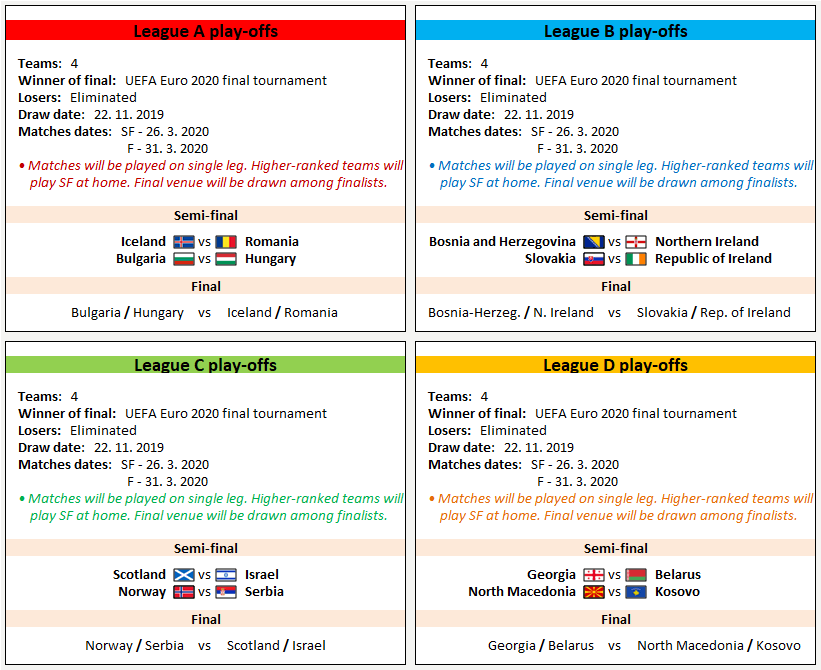 Since there were 7 teams in League C play-offs (including Nations League group winners), a draw determined that Israel would stay in League C PO and rest three teams (Bulgaria, Hungary and Romania) will play League A PO.