Homepage > How does seeding matter?

How does seeding matter?

To find out how the seeding matters, we must have a look at all KO rounds since season 1999/00, in which the seeding was based on UEFA Club Ranking (UEFA did not use Club Ranking for seeding before 1999). That means following rounds:

In other words, every seeded club has got 75% chance on a progress for the next round (and of course - every unseeded team has got 25% on a progress). This number naturally doesn't work too much in an extreme cases - giants like Real Madrid CF wouldn't have a bigger problem to win a tie as an unseeded team, and seeding status for outsiders like UE Santa Coloma probably wouldn't help them to survive a tie.

First graph is showing seeded winning ratio in both competitions (CL and UC/EL) season by season:

Following graph is showing comparison between CL and UC/EL season by season.

We can also have a look at the seeded winning ratio by rounds. As you can see in the following graph, easiest round for a seeded teams used to be first qualifying round in former UEFA Cup - with fantastic ratio 85% (307 wins - 54 eliminations). Old UEFA Cup also offers the second extrem, the most difficult round - Round 4 with ratio 42,5% (17 wins - 23 eliminations). 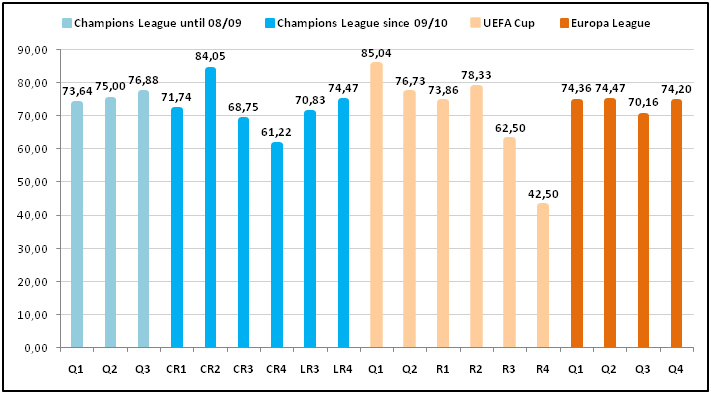 By the way - the deadliest single round was a third qualifying round of Europa League in a season 2014/15. From 29 seeded teams - only 16 survived (winning ratio 55,17%). On the top is Champions League second qualifying round in a season 2011/12, because it is the only round ever with winning ratio 100%! All 17 seeded teams won their tie. Please note - there have been another rounds with 100% ratio; and some rounds have had worse ratio than mentioned 55,17%, but these rounds comprise a very few teams.

So, we found out that an average seeded team has got 74,79% chance on a progress for the next round. Now we can play with this number and make predictions in qualifying rounds. Let's start with a probability on progress from Champions League qualification to Champions League group stage (or from Europa League qualification to Europa League group stage respectively).

To simplify the calculation, we will use numbers 75,00% (for the seeded teams) and 25,00% (for the unseeded sides). So here we go - following table is showing all possible combinations of starting round and the seeding status! 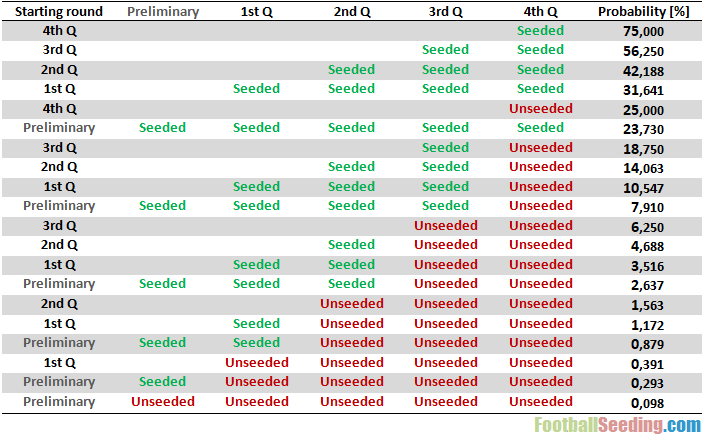 As you can see, the seeding status is much more important than a starting round. Even clubs which must play four qualifying rounds (but they are seeded in all of them) have got bigger probability of progress for the group stage than the teams, which start in last (4th) qualifying round as an unseeded.

Sixth biggest probability is in case of clubs seeded in all rounds including the preliminary one. But it’s very unlikely that some team from preliminary round will ever have so high coefficient to be seeded also in last qualifying round.

At the very end is a way through the five ‘unseeded’ rounds with probability of 0,098%. But no club ever has been able to survive five rounds as an unseeded team. So what about playing the group stage in case that given club starts in first qualifying round as an unseeded side?

By math, probability of surviving four rounds is 0,391%, what represents only one successful team from 256. Because there were less than 400 clubs so far in Europa League Q1 as an unseeded side, only 1 team from them had to qualify for GS. In theory. But what is the reality?

Really, one club has done it – Gabala SC from Azerbaijan! By the way, as you can see at KO Rounds Records, also Hapoel Tel-Aviv FC was able to survive 4 'unseeded' ties (in former UEFA Cup, played without group stage).

Now let's have a look at chances on a progress from Champions League qualification to ANY group stage (either CL or EL):

As you can see, clubs starting their European adventure in Champions League qualification have got very solid chances on a progress to any group stage thanks to a second chance in Europa League. By the way, UEFA doesn't use the club coefficient for the seeding in Europa League champions route anymore, but thanks to this table you can imagine the chances of favorites and underdogs in a given tie.

From 2021, there will be the third European competition - Europa League 2 (Access List). That means the clubs starting in Champions League qualification will have even 3 chances to qualify to any (CL, EL or EL2) group stage! So clubs starting in CL Q2 must win only 1 tie from 3 to secure some of the groups. What are the odds? Team seeded in CL Q2 (and in EL Q3; and in EL2 Q4 in case of elimination(s)) will qualify for ANY group stage on 98,4375%! And what about a club unseeded in these three rounds? Its probability on a group stage will be 57,8125%!

Please note that for our purposes - seeded club is always that club with bigger coefficient. We use this rule also in cases, when the draw is made before deciding of previous round. In that case - UEFA uses the coefficient of seeded club, despite given club may be eliminated. In that case de facto two unseeded clubs play together, so we consider that club with bigger coefficient as a seeded one.
If you wish to purchase all of our statistics - in several big spreadsheets (comparable, sortable and filterable by all rounds, seasons, ratios etc.) - contact us.
If you wish to use this article in your article, you are free to do so (just mention FootballSeeding.com as a source).